GINA Gallery, Tel Aviv, prides itself on being an International naive art gallery.  Where else in the world can you find naïve art from around the world in one space throughout the year? The answer is nowhere.  Of course GINA’s group shows have always included Israeli naives, and solo exhibitions of Michael Falk and Nira Lev were special gallery events.  But what would an all Israeli group show be like? After all, Israel may be famous for many things but naïve art is not generally thought to be one of them. I pondered this question after Israel was invited to be the guest country to be featured in 2012 at the annual Katowice Naïve Art Festival in Poland.  In preparation for the exhibition in Poland, I, with the help of Adi Lev, founder of Naïve Artists in Israel, have been traveling throughout Israel, visiting naive artists in their homes, and discovering an amazing wealth of Israeli talent working in the naïve genre. On March 29, 2012, the first group show of Israeli naive artists opened at GINA Gallery and we found the answer to our question. 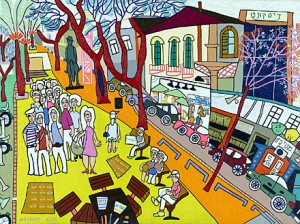 The pastoral,  agricultural landscapes and kibbutz settings are both nostalgic and contemporary, depicting  human interaction with an environment far from the bustling city. 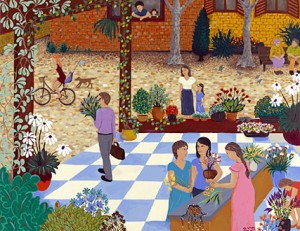 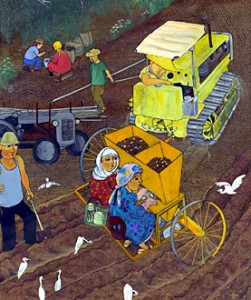 Traditional, reverent themes such as Simchat Torah  and The Rug Canopy   appear alongside the irreverent Happy Girls.  Not only are we hypnotized by the dazzling color, energy, humor and beauty of these diverse paintings. The viewer is invited to look more deeply and to reflect upon the images before them, conjuring up their own connections and interpretations in the process. 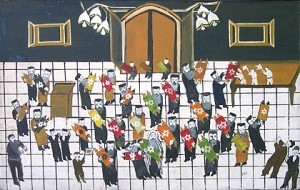 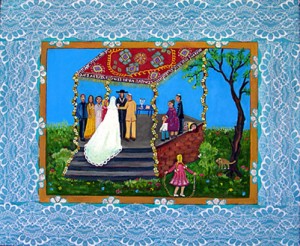 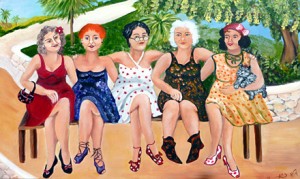 Jonathan Kis-Lev’s painting, The Letter, draws the viewer into a scene that generates both a feeling of belonging and uncertainty. How so? Kis-Lev creates an interior framed by an open window that overlooks a landscape with iconic images.  We are on the inside, close to a table on which a halved pomegranate and an unopened letter rest. The ruby red fruit with its many seeds, a symbol of fertility and the New Year holiday season that follows a hot summer, offers comfort while the letter raises questions: Who is it from? What does it say? Good news or not? Outside, to the left, is a cultivated field; in the background, the beautiful Sea of Galilee with mountains beyond. Twisting paths lead the eye by dwellings that seem to perch unsteadily on their foundations, giving us an off- kilter feeling of uncertainty. Each of Kis-Lev’s paintings in the show play with color, the contrast between interior and exterior and the fine edge that divides between them. 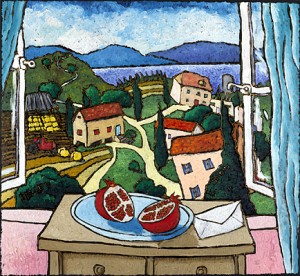 Zoe Sever’s paintings of Jerusalem, Tiberias and Clore Park (Tel Aviv) combine references to iconic images with bold  swaths of color and techniques that create dynamic patterns and textures. Sever’s Jerusalem is truly a “City on a Hill”, perched high above colorful rolling hills that are patterned with semi-circular “contour lines” and geometric shapes, as if an oriental rug. The sky is a midnight blue firmament decorated with flower- like shapes etched in the surface. Below heavenly Jerusalem are two lone ghostly white acacia trees illuminated by the full moon, while traditionally garbed figures and a white donkey.ascend the mountain. 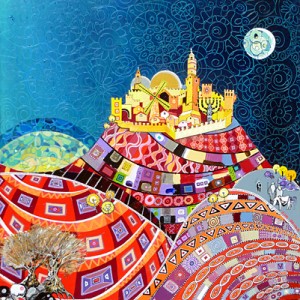 Amalia Assa’s works are an amazing surprise. Using a wood-burning technique, she creates intensely detailed figures and backgrounds that juxtapose patterns and color to create a unified image of subjects, evoking times and places far from Israel.  Whether her subjects are Renaissance-clad figures or art deco dancers in a bistro, her impeccably crafted work is amazing.  We marvel at the smoothness and patterning of the surface, the perfection of shape, fluidity of line and understated power of the images. 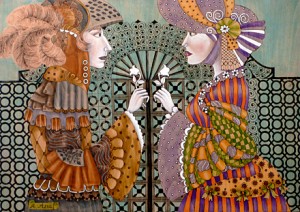 On March 29, 2012, GINA Gallery buzzed with excitement as participating artists circulated among friends, family, gallery patrons and one another.  Not only did GINA Gallery bring Israeli naïve art to the public, it brought a vibrant community of artists together.  Before the close of the evening, artists were planning a get-together at the gallery in early May to share personal insights about their works and to get to know one another better. Keep reading the GINA Gallery Art Blog to learn more about these developments as we plan for the exhibition of 100 plus Israeli naive artworks at the Fifth Annual Festival of Naive Art in Katowice, Poland, commencing on  June 15th. You can view all of the Israeli naïve offerings at www.ginagallery.com and, if you are in Tel Aviv, be sure to visit.