Recently, a big supporter of GINA Gallery living in the UK decided to make a gift of three naïve artworks to the Alder-Hey Children’s Hospital in Liverpool. Happy to help make it happen, GINA Gallery provided the works at an unprecedented discount. Initially I thought that this purchase would serve to beautify the children’s wing. However, shortly after the artworks arrived at the hospital, I received a heartwarming message from the hospital’s arts coordinator. Referring to the paintings she wrote:

“They are an absolutely wonderful addition to our arts for health programe.  Our resident storyteller has been working with our patients, using the paintings to inspire new stories and memories,and we found that children have really enjoyed looking at the art and engaging with it.  They’ve been a great distraction from hospital life and it’s always so pleasing to see children smiling and enjoying doing something creative.”

The Troubador by Raija Nokkala (Finland) 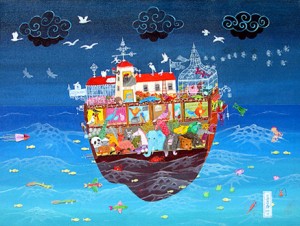 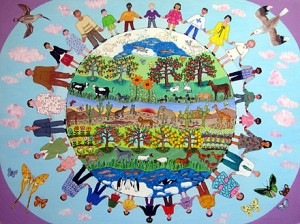 Protecting Our Planet Together by Cecile Emond (Canada)

A few weeks later I traveled to Liverpool to visit Alder-Hey and to observe first-hand the interaction between the paintings and the children. Youngsters undergoing dialysis and chemotherapy as well as those awaiting or recovering from surgery were participating in mini-workshops designed to stimulate the imagination, promote sharing of feelings and encouraging positive thinking.  They eagerly responded to prompts from the counselor working with them, pointed to the characters and elaborated on the narrative before them.

GINA Gallery is working on deepening our connection with Alder-Hey by arranging for a naïve artist to visit the hospital and conduct a three-session painting workshop with the children. At that same time, I plan to talk personally with them about the world of naïve art.

This unexpected and welcome experience opened my eyes to the power of naïve art to not only decorate and beautify our homes, but to spread well-being and happiness to the wider community.  How wonderful it would be if others took it upon themselves to initiate similar projects in local institutions that are near and dear to their hearts.

GINA Gallery’s new exhibition, Nature Inside Out, which opened on January 12, showcases the finest naïve artists from Argentina and Brazil. Each one creates a colorful world for the viewer to enter and share.  Whether depicting the lush, fragrant flowers arrayed for sale on a street corner by  the local florist  or the overgrown river bank where a woman comes to collect water for her family,  the characters we meet are thoroughly at home in their natural environment. 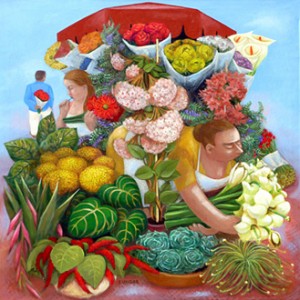 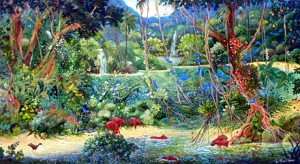 Naive artists’ works are enriched by new experiences and inspirations. In “Tel Aviv from My Window”, a Brazilian artist shares her visit to Tel Aviv, looking out over the city with its iconic smokestack on the horizon.  Back home in Buenos Aires, an Argentinean pays homage to Edward Hopper by incorporating his woman in white into a playful street scene filled with people of all ages and assorted pets. 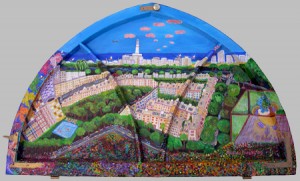 Tel Aviv from My Window by Paulina Pinsky (Brazil) 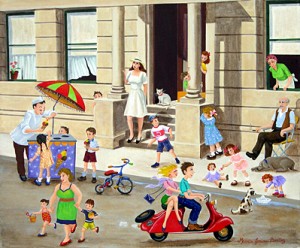 Whether the artist takes us into the countryside or brings us to a sidewalk in a pulsing city, the shared vision and talent of the naives rest in transforming the mundane into the magical.

The exhibition, Nature Inside Out, at GINA Gallery in Tel Aviv, will continue through March 23, 2012. Navigate to the GINA Gallery web site by clicking on the “What’s New” tab at the top of the Blog page to view more selections from this marvelous show.  If you see something you like, contact us at naiveart@ginagallery.com  for more information and a price quotation.

Recently I spent 10 days traveling in four countries of central America, Nicaragua, El Salvador, Honduras and Guatemala Arriving in Managua on the first leg of the trip I was struck by the contrast in life styles of the artists of Central America compared to that of the naives of Brazil and Argentina and of course from that of the naives of Europe.  Managua, the capitol of Nicaragua is beset by temperatures and humidity hovering around 100. Life in Nicaragua is tough which makes all the more surprising the idyllic reflections of everyday activities in the paintings of the Nicaraguan naives. 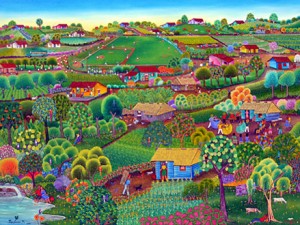 Noel Calero lives in a small village south of Managua and devotes his every waking moment to painting dream like recollections of his youth in  his home village. The first time I met Noel he had a pet crocodile in his back yard .  We all made a wide berth away from that family member. Not surprisingly upon my next visit the crocodile was no more having proved to be a menace to all who visited Noel’s home.

Looking around Noel’s village I was hard pressed to understand how his eye and hand turn a scene of ramshackle homes and poorly clothed denizens into a delightful, heartwarming corner of the world. If you focus on his painted world you can share in the beauty of the diverse natural environment he recreates. A multitude of different colorful trees, flowers, crops, gardens, groves fields abound.  While one man carries a back load of fire wood home to his waiting woman,in the distance you can  enjoy a local baseball game (The baseball league in Nacaragua is extremely important and supplies the US major leagues with many of its top players). 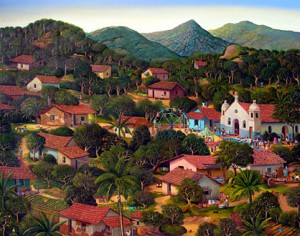 After my day in Nicaragua I was off to El Salvador where I visited several local naives including Fausto Perez. In his youth, Fausto grew up in a village far away from San Salvador, the capitol. His recollections of childhood are filled with joy and nostalgia. One day Fausto took me back to his childhood village and I was struck by the unbridled imagination from which he conjures amazing poetic scenes. For me Fausto’s power is  his ability to capture a scene in exquisite detail and infuse the entire picture with an ethereal light that freezes the scene in time according to nature’s clock high above in the heavens.  The bright noon day sun , the early evening shadows or the waning of the wee hours into an early dawn are rendered lovingly turning each individual painting into a unique viewing experience. 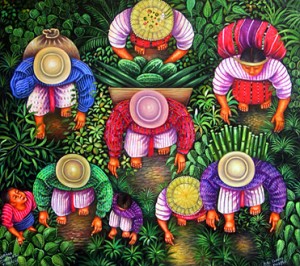 From Field to Village by Mariano Gonzalez Chavajay

Next stop-Guatemala: Many of the Guatemalan naives are concentrated around the well known Lake Atitlan, a breathtakingly beautiful lake ringed with many volcanic mountains. The trip from Guatemala City to Atitlan takes more than three hours and reaching the villages of the artists entails crossing the lake by motorboat. One of the famous families of artists living by the lake is the Chavajay family. Mariano Chavajay is the “patriarch” of the clan and his brother, sister-in-law and several cousins are amongst the finest naives in the country. These artists enjoy painting the local scenes both from a frontal viewpoint and birds’ eye perspective.  The naïve art of Guatemala is folkloristic in nature and captures the ethnicity and traditions of the culture by depicting seasonal festivals, market days, crop harvests and handicrafts. The decorative beauty of these works emerges from the colorful ethnic costumes, the country’s lush flora and heartwarming interactions of the local folk.

I travel to Honduras regularly but my first visit was in 1983. Landing in Tegucigalpa, the capitol city can be a hair raising experience.  Even the most able of pilots must perform aerial acrobatics in order to maneuver the plane safely through the ring of mountains surrounding the city.

Thirty years ago I was in Tegucigalpa as an international commercial lawyer, negotiating a major military contract for my then employer. When the negotiation had been completed, I left the hotel to catch a taxi to the airport however, across the street was a small gallery with a painting by Roque Zelaya Acosta.  Something about his work spoke to me and after a long conversation with the gallery proprietor I decided to purchase “The Bull Fight”, my first naïve art acquisition. At that time the name of the artist didn’t register with me and the signature on the canvas was illegible.

Approximately eight years ago when GINA Gallery opened its doors, I returned to Tegucigalpa to commence my search for the leading naives of Honduras. At the airport I was met by Roque Zelaya , whom, I had been told was the top naïve artist in all of Central America. Roque explained that we had a very busy itinerary ahead of us and that he was going to take me around Tegucigalpa to meet the various important naives of the country.  At the end of a very long day, he suggested that perhaps we would like to visit his home, as well, to see some of his works. Imagine my surprise upon entering his dwelling to see on the walls several works that were clearly by the same hand as The Bull Fight.  This was the beginning of a warm and deep friendship that has continued to today.

Last year, when GINA Gallery was contemplating the printing of a new annual catalogue, I mentioned to Roque that we were looking for an appropriate naïve artwork that would appear on the cover..  When I returned six months later, Roque presented me with a beautiful panoramic scene of his childhood village entitled “My Pretty Woman”. In my heart I knew that I had found just the right painting for our catalogue’s cover.

A few weeks ago I returned to Honduras and as usual was greeted with a huge bear hug by the smiling Roque Zelaya. Upon arriving at my hotel I presented Roque with the new catalogue.  It was an emotional moment for us both as Roque was visibly overwhelmed by this honor.  GINA Gallery is proud to have “My Pretty Woman” by Roque Zelaya as the signature painting on its catalogue which is the gallery’s ambassador of good will to the world. 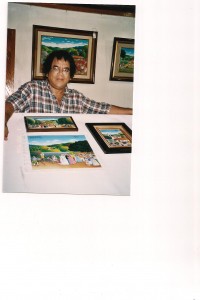